I found this poor guy’s blog – wrote for 4 years on how he was going to read Ulysses and he did a lot, but apparently never made it through.  Or else got so swept up in it on his last post he never needed to blog again.

So, far, it has not been so bad.  I’m even actually enjoying some of it.   Chapter 3 is a bit tough.  But then you go on to Bloom eating breakfast and for some reason I cannot fathom, that’s entertaining.   The sheer enjoyment of it, perhaps.  I am a little worried it will bog down and I’ll become enmired in some future book, but shouldn’t worry until it happens, should I?   I’m only up to part 7.   I don’t think I can do 23 pages a day.   I also became worried that the cheap-ass e-version I bought didn’t have all the words and, aside from spot-checking, there’s really no way to tell.    It’s a long damn book whether it’s abridged or not.   I became worried about this because another cheap version is apparently missing stuff.   It would be very easy to do and not be able to tell in some parts.   I do have a Gabler print edition, but don’t want to lug it around if I can help it.

At any rate, sofarsogood and hope the other six people in the world doing this are enjoying it. Last night I got to a bit which cracked me up – Bloom and the others at Dignam’s funeral, in the cemetery, Bloom thinking about the resurrection of the body:

Get up! Last day! Then every fellow mousing around for his liver and his lights and the rest of his traps. Find damn all of himself that morning.

So, the Ulysses readalong started yesterday.   I’d already be a day behind if I hadn’t started early.  I’m roughly where I should have been 24 hours ago, but I ain’t giving up yet.  I started off reading the annotated version here provided by a commenter on Roof Beam Reader’s site:

But just found all the notes too distracting.   Like trying to read when someone’s interrupting every sentence.   So I decided just to read the thing, wade into that river of words and let it flow around me like the Liffey and see what comes of it.

—He can’t wear them, Buck Mulligan told his face in the mirror. Etiquette is etiquette.  He kills his mother but he can’t wear grey trousers.

Which I started to do, then got distracted by My Name is Red, then by Howard’s End is On the Landing, then by Utz, but now.   Now.   I am pulling my attention away from each of these temptations and going to wallow in Joyce if I can.   Though as you can see I’m easily distracted, but we will give it the old college try.   Me and the cat.   And here’s a little song to be going on with…

Lal the ral the ra
The rocky road to Dublin 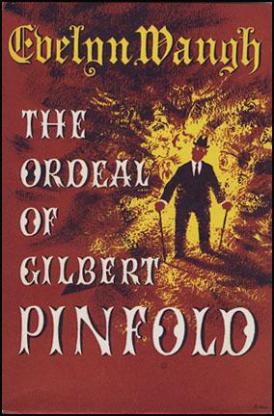 This was not the cover of my copy of The Ordeal of Gilbert Pinfold, but I like this one much better, probably for just how wrong it is.   The little picture of Gilbert and his sticks is good and the hellishness surrounding him is not a bad evocation of his hallucinations, which are entirely auditory, but the fonts on the author and title are terrible.   It looks more like an historical epic like The Robe or something by Thomas B. Costain.   At any rate, Gilbert Pinfold is none of those things.   It is a quick read set in the time it was written and a heavily autobiographical episode of a novelist taking a cruise to the island known at the time as Ceylon for his health.  He is having trouble with rheumatism and sleep and taking a variety of drugs along with alcohol to deal with it all, unsurprisingly unsuccessfully.   Once on board the Caliban he begins to hear all sorts of nasty, disturbing noises and scenes which it never dawns on him are not actually happening.   He develops one ridiculous theory after another for how this could actually be happening, but the reality of the situation eludes him.   It is a quick read and fairly enjoyable though his hallucinations get somewhat tedious.   (I can only imagine how incredibly irritating this must have been in real life.)    Oddly enough at one point one of his hallucinatory voices accuses him, among other things, of having stolen a moonstone.  I thought this was quite a coincidence having just finished The Moonstone last month.    (A far less surprising coincidence was opium figuring in both The Moonstone and The Luminaries – as the time they’re set in is almost the same.   From this small sample, opium was very popular both medically and recreationally at the time.)   Pinfold’s the only Waugh I’ve read except Brideshead and I’d definitely recommend that over it, but I didn’t dislike it and as a glimpse into Waugh’s character I think it’s of more interest than as a novel.

Roaming around book blogs this evening I ran across Book Snob who felt cheated and was absolutely furious with The Luminaries, which I’ve just finished as well.   I enjoyed it a lot, so I read her review and I can’t disagree with any of it.  There isn’t a lot of depth of character or character growth, I agree the horoscope stuff is just a gimmick that doesn’t add anything, you will not learn from this book what it’s like to be an immigrant or how the Maori felt at the encroaching of the white man on their land, and yet none of that mattered a whit to me.   I enjoyed the book first to last and would simply advise anyone thinking about it that if after a hundred pages or two you aren’t enjoying it, stop.   Because it isn’t going to change.   It goes on like that for another 600 pages and while I found the ending not completely fulfilling, I certainly wasn’t devastated.   Besides, if Catton had written all that, the book would be 2000 pages long.

So I went to Book Snob’s other reviews to see what she did like and found The End of the Affair, which I read not long ago and was fairly non-plussed by it.   She loved it from page one.   I found the main characters rather perplexing and not terribly likable.  Having an affair for years, but never leaving your loveless marriage seems like a big old waste of three peoples’ lives to me.   Sarah’s strange approach to religion was for me a shake my head sort of situation.   She seemed to sort of drift into it, never really believing it, nor able to let it go, rather like her marriage.

All of this is not to deride Book Snob’s taste in books by any means, but rather to point out how we’re all looking for different things in books and finding different things.   She’s far from alone in her praise of The End of the Affair.   In fact, I think I’m more alone in my underwhelmedness with it, but I consider myself lucky because I enjoyed the really long book and disliked the short one.

Finished The Luminaries the other night and enjoyed it from beginning to end.   If you enjoy Victorian lit or mock-Victorian lit, I’m sure you’ll enjoy this.   Over 800 pages, but it moves along, tickety-boo.   There are about a 1,000 questions in the beginning and for a good long way every answer raises more questions.   Walter Moody arrives in the New Zealand mining town of Hokitika in 1866 having had a somewhat disturbing voyage.   He seeks the comfort of a drink and accidentally crashes a secret meeting of twelve townsfolk who are having a confab on the strange events of the recent past.   Each of them sheds light on some aspect of the mystery, but there is much left to wonder about even after everyone has contributed his part.

After finishing I thought, what was the point of the zodiacal stuff and the structure of the book – each part being about half the length of the previous one.   I read a few professional reviews to see if they could shed any light on this and no, they couldn’t.   I don’t think it adds much to the story, but I do love the old fashioned chapter headings.   Also, although it’s a very long book, there’s no real fat in it.   It takes that long to introduce the characters and tell the story.   It’s not an exercise in long, convoluted sentences or endless description.   Highly recommended.

So now, if I’m going to readalong Ulysses starting on the 15th, I have a few days to read something short.  I believe I’m going with Waugh’s The Ordeal of Gilbert Pinfold, which so far, seems to be straight autobiography.  I might start Ulysses early as one other commenter at Roof Beam Reader is planning to do, given as there’s not enough time for us ordinary mortals to read the darned thing.

So, I wasn’t going to post for a while because I’m hacking away at The Luminaries, but two things happened.   First, I slipped an Agatha Christie in there – Towards Zero which features Inspector Battle rather than Poirot or Marple.   A good one, not one of the greatest, but a good, solid mystery with a conclusion I didn’t guess although I had worked out some of the clues, I just didn’t add them up properly.   One aspect of the plot seemed very familiar, but I can’t remember where else I read that so I don’t know if she’s repeating herself or someone else thought up the same thing.

The second was a challenge posed by Roof Beam Reader.   Ulysses Readalong – definitely a book that can use some company, but I’ve just read the Moonstone and am reading The Luminaries.   I had thought to read some short, modern works to get my count up a bit, not another giant tome.   Plus he’s only giving us 3 weeks.   3 weeks!   Not even a month!   40 pages a day of Ulysses doable?  Nope.   But startable.   And maybe once started, I will go on and finish.  I’ve had a copy forever.   And I might even know where it is.   I guess I have some time to think about it as we’re not supposed to start until the 15th.   Which is good, because I might be able to finish The Luminaries by then.