Mom tried, she really did, so don’t blame her that I finished my entry in the 1951 Club 10 days late.  A Question of Upbringing is the first volume in the roman-fleuve A Dance to the Music of Time.  I read the first few years ago, but never got through the whole thing.  It is the story of four men who went to the same school, though in a way, not together.  They aren’t the same year and the fourth, Widmerpool, isn’t even friends with the others.  He is an awkward boy, not one of the gang, but there’s evidence that there is more to him that will emerge over the course of the cycle.  The narrator, Nicholas Jenkins, is friends with Peter Templer and Charles Stringham.   Both of whom graduate before Jenkins, but Templer doesn’t go to Univeristy and Stringham can’t stand it and leaves as soon as possible.   This seems very odd as both of them are well-off and I would expect both to get a degree, but they both go into business.   I suppose that’s a sort of spoiler, except the book really hasn’t got a plot.   There’s no real suspense, nothing hinges on anything so far.   They all age a few years and we learn a bit about them, their families and society in the early 20s. 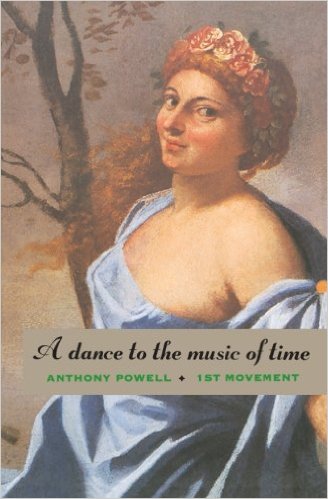 I liked it well enough.  Nick is a fairly classic narrator.   A little more naive, less experienced, not as rich as his friends, but not remarkably so.   He seems popular enough, likable enough, without having any characteristics too outstanding.   He likes to read.   He’s interested in women, or starting to be.   I don’t know whether it will all end up being a great read or not.   Kaggsy’s review (really much more thorough than mine, go read it) reminds me that Powell had some connection with the Bright Young Things/People and that Jenkins lends another odd character, Quiggin, a copy of The Green Hat.   A book I failed to finish for the 1924 club.  It’s around here somewhere.   Maybe I should give it another go after Vile Bodies.   That’ll give me an all-round BYP education

I usually sign up all excited for Dewey’s 24 hour Readathon, but I had a big outing today and somehow didn’t get around to signing up, but better late than never, yes?   I also know I won’t stay up all night and if I open a book and lie down in bed, it might be all over as I woke up unusually early for me.   But I will give it a go.

I decided some days ago to start a new book for readathon because I usually do.   So even if it’s almost half over I guess I’ll keep to that.  And yes, it’s not going to be one of the hundreds of books I already have.    Although I have wanted to read it for a couple years now.   Starting The Red Notebook by Antoine Laurain.   It seemed to fit my mood.   More later. 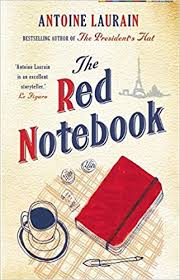 9:00 – About 1/3 through.   A fast read.   Laurent – a bookstore owner in Paris – finds the stolen bag of a woman named Laure, but that’s all he knows.   How can he find her when the bag has no last name, no address, nothing to help much in narrowing down the owner of the handbag from all the women in Paris.   I’m worried though about her cat.

So, of course, I fell asleep and, unlike yesterday, did not wake early.   So, even this short, easy read is undone.   Only 11% to go and so annoyed at the heroine.   Or the author maybe.   For one thing, it’s supposed to be romantic, but it’s a bit stalkery him tracking her down.  And even though we know he’s all right (this isn’t Gone Girl), it just feels a bit weird.  [Spoilerz] So, he disappears without a trace because he realizes it’s a bit weird – guess that’s a spoiler, I’ll tag this — and then it’s her turn to find him.  But she’s so bad at it, she stops asking if a Laurent works in the local bookshops, so isn’t finding him. Lazy idiot stalker!   [/spoilerz}

Short.  Cute.  Shallow.  Stalkery.  Romantic.  Full of plotholes.   Many people on Amazon seem to have enjoyed it and not been bothered by the stalkiness.   Some were bothered by how fluffy it is.   But honestly, the last three books I’ve read set in bookstores turned out to be disappointingly shallow.   It’s certainly a fast read.  If I hadn’t had my outing yesterday, I probably could have finished a couple books.

This qualifies for European Reading Challenge and Around the World.

A Master of Mysteries by L.T. Meade and Robert Eustace is the next in my Mystery chain sponsored by Bev.  It took me ages to read it although it’s both short and entertaining.  In the last Tommy and Tuppence novel, Postern of Fate, Tuppence names a bunch of children’s stories and authors she finds in their new house.  One of these authors was L.T. Meade who also wrote mysteries.  So, I dug up her A Master of Mysteries, published in 1898, and went with that.  It is a book of short stories in which the main character John Bell investigates apparently supernatural occurrences.  Some of the solutions are a bit dubious, but the writing is lively enough and each story kept me reading to the end of it.  I’ve just been reading so many other stories that I got behind in Master. 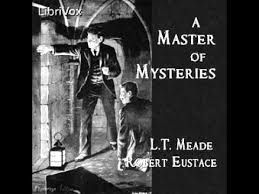 Also apparently available as an audio book if you prefer.

While not as good as Sherlock Holmes, I’m not sure why these stories have fallen into such complete obscurity.   I’d never heard of either author, though Meade was a popular and extremely prolific author.  Unless this one was exceptionally good, it might be worth seeking out her other work, mostly mysteries and stories for girls.   The mysteries may hold up better than the children’s literature, but who knows?  Quite pleased the mystery chain lead me here although no authors were mentioned in the book, so I will have to find something with either Master or Mysteries in the title.   In fact, I think I already found one, but can’t remember.   I’ll have to search the old Kindle.  It is great that so many old books are so easy to find now and are very cheap or free.   Back pre-internet I suspect I could have hunted half a lifetime for this book.  And while good, it’s not worth that.

So I’ve watched the whole first season of Father Brown on Netflix and I’ve enjoyed it pretty much, but was confused at first by when it takes place.  A bit of research revealed that they’ve set it in the 50s which allows them to do more up-to-date plots, I suppose, touching on things like World War II, asbestos, dyslexia and other things Chesterton never knew about.  (Pretty sure no one said ‘man up’ in the fifties.  I hate stuff like that.)   For comparison, I read a couple of stories that have the same titles as the episodes to see how they compare.   The Hammer of God is fairly similar.  Motives and other things more modern than they were, but some stuff comes directly from the story.   The Blue Cross which starts The Innocence of Father Brown and ends the first season of the show is extremely different.   There is Father Brown, Flambeau, a sapphire cross and a long rambling theological debate in both, but not much similarity otherwise.   I enjoyed the story more, particularly as I believe it was the first Father Brown story and is a good introduction to quite an eccentric character.   Can’t say I agree with some of his philosophy espoused in both story and show, but that doesn’t interfere with the enjoyment of the story itself.   The show is a bit grim with a torture scene and a deliberate running into by car.   (Actually that happens in more than one episode.)

In fact, like much modern TV and movies, grimness must be inserted frequently.  You can’t just have someone brained with a hammer, you’ve got to see it over and over.  Sometimes I think the goal of the entertainment industry is to create as much PTSD as possible.   All the usual modern examinations of horrible events in the past:  child abuse, sexual abuse, misogyny, single women who get pregnant being treated like dirt,   I don’t know if any of the characters in the show are in the stories aside from the main one.   I will read more and watch more, but I tend to think of it as two entirely different things.   Two priests named Brown who solve mysteries, but that’s simply a coincidence.   Brown is a very common name.   Also, the authors of the shows don’t seem too particular about their sources.   The Rod of Asclepius in season 4 is totally stolen from Green for Danger by Christianna Brand.  (Alastair Sim is very entertaining in the movie.)

A good cast for a moderately entertaining show.

Also, I think I will try to join the 1951 club.   I’ve been meaning to read A Question of Upbringing for years.   I hope I can find my copy. 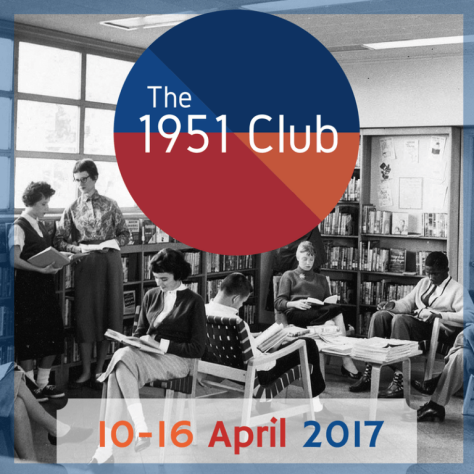 John McPhee’s essays on Alaska published in 1977 are still on many peoples’ Best Books about Alaska lists which is how I chose it.  Is it still an essay at 200 pages?  Not sure, but he does have a fine, easy style of writing.  The book is in three sections 1) McPhee and a small group of outdoorsmen, some government, exploring a river in the wilderness.  2) Flying around with a committee that’s supposed to determine where the new capital will go  and 3) the tiny town of Eagle and its residents, the people who move there or “come into the country” as they say. the natives, how everyone deals with living there, mining, trapping, the politics, survival.  It is a very detailed picture of the mid-70s in small-town Alaska.     Probably too detailed for some.  Mostly I found it interesting.  I had no idea before how destructive a single gold miner can be.  I have little sympathy for them.   Telling me how huge Alaska is makes no difference,  The lower 48 are 5 times larger and look what we’ve done to them.  I don’t mind the hunters and trappers.  I think the animal populations can survive though hunting from airplanes seems crazy to me.  You’re spending how much on fuel for that?    I could also be wrong about the resilience of the animal population.   We’ll never see a passenger pigeon unless they make one in a lab.  The trouble with individual views is they really don’t know, unless they’re using studies, what the big picture is. 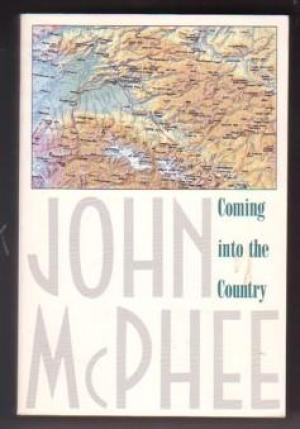 I feel like I’ve learned a lot about Alaska and even though 40 years have gone by, I’m sure a lot of it’s still relevant.  I was surprised how much I enjoyed the pure wilderness part, although some of that has to do with McPhee’s description of their recalcitrant canoe.  Surviving in the wilderness is something I have no interest in doing personally.   Going out there, building a cabin, trapping animals, knowing you won’t eat if you don’t catch a fish that day — not my idea of fun.  And honestly, I think it gives you a false sense of your own independence.  They are certainly far more self-reliant than I am, but as far as I remember, they all purchase supplies from outside.  Fuel, planes, snow machines, bulldozers. even those who don’t do those things buy flour and other food, they could survive then on a couple thousand a year, but no one could survive on nothing a year.   They need each other and to a lesser extent, the rest of us, just as we all do.  Coming into the Country is a beautiful book about a beautiful land I look forward to visiting, but I wouldn’t want to live there.