Having enjoyed Close Quarters, I ordered a few more Michael Gilbert novels.   It seems for the most part you’re stuck finding old second-hand copies.  British Library Crime Classics has apparently put a couple out, but not in the States yet.  They always seem to take longer here.  At any rate, this one drew me because the main character is running an art book store in Florence and the story involves possible Etruscan forgeries and/or archaeological theft.   That seemed pretty much up my alley so I turned to it next, even though it’s his 14th novel or so.   Gilbert still writes well, but that description of the story is a bit misleading.   Our bookseller is swiftly tossed in prison for a hit-and-run he presumably didn’t commit.   Owing to the Italian political situation at the time (shortly after the bad flooding in 1966) it’s much easier just to find the man guilty.   But his friends rally ’round and find a good lawyer and do some investigating themselves trying to get the bookseller off.   It’s a well-written story, but it just didn’t grab me.   A couple of thugs come to town.  We follow mainly an English Etruscan Art expert as he looks into the archaeological digging of a wealthy art dealer who likes to host Etruscan themed dinner parties.   Where’s Etrusc, I wondered?   Of course I know it wasn’t called Etrusc (or presumed it wasn’t, but realized I don’t know bupkis about the Etruscans.)  Etruria, for those who don’t know either.  They flourished in central Italy from the 8th to the 3rd centuries BCE and they made some beautiful stuff. 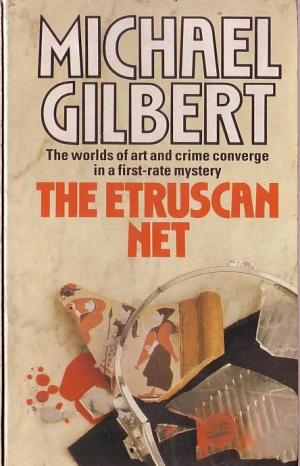 So, it’s hard to talk about the book too much because I really didn’t get into it, although I did finish it.   It’s just not my kind of story.   Although there’s a plucky young woman, the erudite Etruscan expert, a divine young man who believes he has super powers and as far as math goes, actually does, and his guardian the art dealer who would rather have been an ancient Etruscan…  it should all add up to an interesting story and yet somehow it was a bit of a chore to read it.   I’ll probably read the others that I bought, but it’s put a damper on my enthusiasm for Michael Gilbert.

This site uses Akismet to reduce spam. Learn how your comment data is processed.